optiDUCT™ is manufactured from virgin HDPE and has an ultraslippery silicone co-extruded bore. This dramatically reduces the friction between the cable and the duct. This means lower pulling tensions, less cable damage, longer pulls, and quicker installation. optiDUCT™ is suitable for direct burial or used as a sub duct.

M4A, the manufacturer of optiDUCT™, adheres to the highest quality standards. M4A has been awarded ISO9001/2015 certifications optiDUCT™ duct has a solid co-extruded super slippery bore in which silicone molecules are evenly and permanently bonded to the inner duct wall. They do not dry out or get displaced by the pressure between the duct and cable. The COF between a duct and cable depends on many factors such as hauling speed, type of cable sheath, and side wall pressure. However, in general, the COF of an optiDUCT™ is about one third of that of a plain HDPE duct.

When poor quality HDPE duct is unreeled or uncoiled it retains the curvature of the drum or coil. It does not lie flat, it spirals. This is known as coil-set and it is a measure of how much reel memory a duct has. Coil-set creates two problems. Firstly, the spiralling makes it extremely difficult for the sub duct to be hauled into the main duct. Secondly, once the sub duct is installed I the main duct, or directly buried in the ground, it does not lie straight but lies in a snake-like configuration. At each curve, the cable touches the duct. The friction between the cable and duct at these points of contact adds cumulatively over the entire length of the pull, and dramatically increases cable tension. The table below shows the effect of coil-set on cable tensions. The higher the coil-set the greater the amplitude. As the amplitude of the snake increases, so the pulling tension increases exponentially.

Duct that is coiled before it has had time to cool sufficiently from the extrusion process exhibits high coilset. The optiDUCT™ manufacturing process is designed to reduce coil-set to the absolute minimum, so it lies as straight as possible when unreeled.

This assumes an 800m pull, a cable mass of 1kg per meter, a friction coefficient of 0.15, no incoming tension, and a wave period of 9 meters. 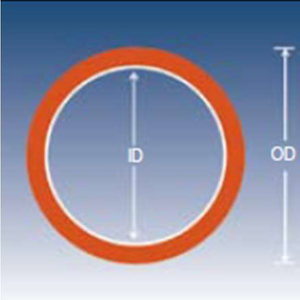 optiDUCT™ is available in 3 standard outside diameters and 2 wall thicknesses depending on whether the applications are direct buried or sub duct.
As a rule of thumb, the cable diameter should not exceed half the inside diameter of the duct. 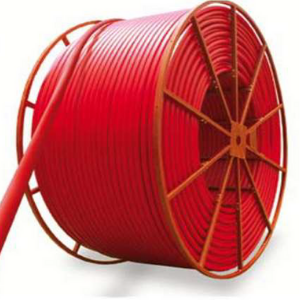 optiDUCT™ is supplied in coils or on steel reels depending on customer requirements.

The steel reel is designed to stand on the flanges and must always be handled in the vertical position during storage, transport, and installation on site.

Steel reels must not be handled horizontally as flange spokes can damage ducts.